Some supermarket chains, including Kroger and Safeway, believe that modest per-reusable-bag rebates at checkout have done little to remind customers to bring reusable grocery bags. 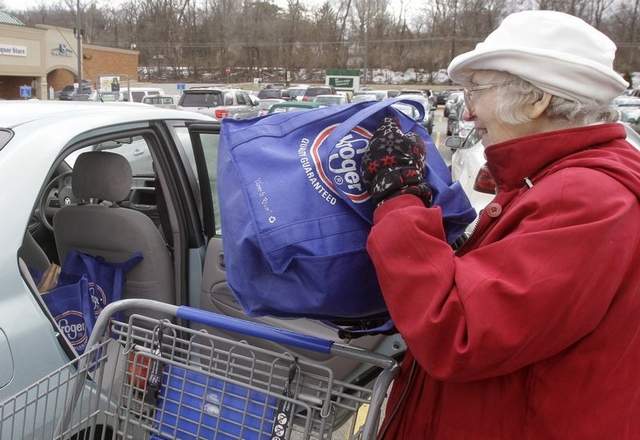 Kroger Co., the nation’s largest supermarket chain, had stopped (in many regions) giving 3- to 5-cent rebates or fuel discounts for each reusable bag. Company officials say they’re focusing more on promotions and educational efforts, as they found no significant difference between reusable shopping bag use in markets with rebates and those without them.

Safeway Inc. also has been phasing out cash rebates. Instead, the chain is offering targeted discounts. For example, shoppers who use Safeway’s “Bright Green” reusable bags get 10 percent off Safeway’s line of environmentally geared household products.

Some governments, however, have found other ways to encourage reusable grocery bag use.

San Francisco in 2007 banned plastic bags and was followed by more than a dozen other cities and counties. Washington, D.C., last year began taxing shoppers 5 cents per disposable bag. Disposable bag use fell by 80 percent in some stores, officials say. Several states are considering bans or fees on disposable bags. Countries from Ireland to China have also restricted plastic bag use.