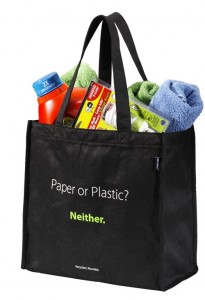 The Lantern, Ohio State University’s campus newspaper, reports that OSU Campus Dining Services joined the campus-wide effort to go green this fall by making the switch from plastic bags to reusable polyester bags. Prior to the start of the 2011-2012 school year, plastic bags alone were available at most campus dining locations for students to carry their meals home in.

The orange bags were purchased with Campus Dining Services money, as were the black reusable grocery bags. Sustainability committees are reimbursing the money as part of campus’s sustainability project.

Every student living in residence received at least one free black reusable bag. The bags were also distributed at Off-Campus Student Services.

The reason behind the switch was not monetary, but seen as a push towards sustainability. The school has also done away with disposable trays.

Robert Hayes, operations manager of Marketplace on Neil Avenue, said he has gotten mixed feedback from the students.

The solution? Hayes said he keeps a surplus of the black reusable bags and distributes them whenever students need them or ask for them.